Forum rules
Important note:
The Mac OSX version of Pale Moon is provided by various people and is not official or in any way organized at this moment. Your assistance in bringing this build to fruition is greatly appreciated, but you can expect there to be bugs and problems as long as we don't have a maintainer or official builds!

Any specific bugs you find that don't have their own topic yet: please make a new topic; one bug per topic please to keep things organized.

Please also note that these builds are currently created by various independent Mac OS X people and not by our core team; core devs will likely not be able to provide insight or assistance due to lack of Mac hardware and OS/build knowledge for Mac. You'll have to solve the issues among yourselves.
Post Reply
18 posts • Page 1 of 1

Works as intended, thanks!
Top

Thank you very much
Top

Nice!
Can't live without Palemoon
I am happy NOT having to use Firefox & Chrome
Top

Get on the winning team and use multiple browsers.

I use Waterfox and Palemoon.
Top

Though you lost at typing the name of the browser correctly.

That is not what I said.

Off-topic:
Read YOUR own post, please.
"If you want to build a better world for yourself, you have to be willing to build one for everybody." -- Coyote Osborne

Now, on-topic for this.

I'm actually pretty sad that this is the way Mac versions have to be announced and updated. I've been looking forward to being able to announce official Mac builds finally being there, but for all the people building various versions as-needed "because nobody else did it this time" there's been no structure or real effort to have official support on the Mac platform.

I was hoping that of the various people who have built Mac versions so far at least one would be willing to put on the maintainer hat and actually work with me to make official builds happen. Someone who is willing to offer a longer-term commitment of building and releasing mac versions. But no such thing has happened thus far.

Is there no-one then who is wanting to take on this role? None of the past builders? No-one new who will do this?
If the answer is still a resounding no or deafening silence, I guess I'll have to change our roadmap.
"If you want to build a better world for yourself, you have to be willing to build one for everybody." -- Coyote Osborne

I can do builds, troubleshoot, document, and identify bugs; I have time, and I'm very interested in being part of the solution but I'm not the right guy for the main role. It would take me too long to learn the ins and outs of the mozilla code, and I've tried previously (!). So if you're looking for a team of people, count me in.
Lonely Planets - serial fiction on the Radish app! http://www.radishfiction.com/
Top

HuwEdwards
New to the forum

I'd probably give up on using my MacBook if I couldn't use Pale Moon in native form.
Top

When in Discord, and having the link embedded, it plays just fine. So it's a Palemoon issue.
Top 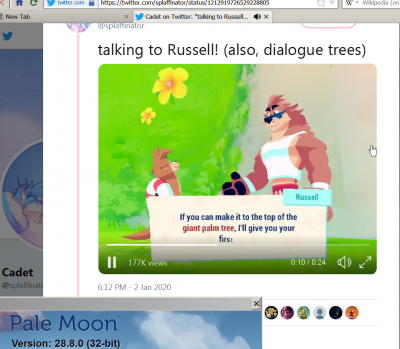 "People think of education as something that they can finish." ~ Isaac Asimov
Top

Looks like this is a glitch, not a bug. It plays fine now, I don't know what randomly made it unplayable before.
Top
Post Reply
18 posts • Page 1 of 1