Board for discussions around the Basilisk web browser.
Locked
11 posts • Page 1 of 1

The heading and footing portions of the web site do not render correctly, both once logged-in and on subsequent pages.

The page also renders correctly on my Win 7 x64 machine with Basilisk.
Top

No one can check this without a link.
Safe Mode / clean profile info: Help/Restart in Safe Mode
Information to include when asking for support - How to apply user agent overrides
How to download videos

Don't know what Basilisk uses for a UA, but try spoofing it with a FF UA & see if that makes a difference?
Top

therube wrote:Don't know what Basilisk uses for a UA, but try spoofing it with a FF UA & see if that makes a difference?

What would I change or add to enable viewing the problem site? Would this also address annoying messages from other sites that tell me that I need to update Firefox or Chrome or use Edge to visit the site?
Top

A problem like this is common with browsers other than the very few ones (with the latest version installed and with very few/no tweaks or extensions) accepted at many financial institutions.

Have you tried a second, new, virgin Baslisk profile at the site? That frequently works and, if it does, then you can just switch to the newer profile when you need to access this particular site. 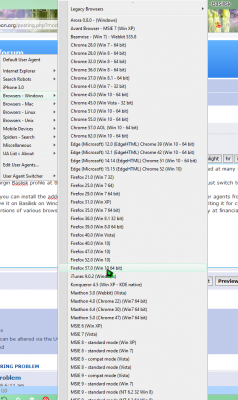 This is a very old extension but it works. I have it on Basilisk on Windows 10 Pro and on Fx 52.9 ESR. However, its author is rewriting it for current Fx so the latest list of user agents is from 2017. That list doesn't have the most recent versions of various browsers to fake your Basilisk UA as. That's usually a problem only at financial sites. If the page renders correctly on Pale Moon (Fx 55) then Fx 57, which is in the latest list, may work on your Basilisk.

I have problems with Basilisk, Vivaldi and now Fx 52.9 ESR at some financial sites. Very recently, I could not get Barclays bank site to render correctly in Basilisk or my other browsers. I was surprised there was a problem with Vivaldi as it is based off Google's Chrome browser and it is the current, latest version. I finally had to, very reluctantly, use IE 11 which worked perfectly. Periodically, I have problems with Chase bank on any browser except IE 11. I get those annoying complaints about needing to update Fx on some sites. I think IE or Edge work where the other browsers don't at least partly because there is little tweaking or extensions for those browsers (this is why I suggested first to try a second, pristine profile of Basilisk).
Top

Thank you smokey. I had already downloaded the user agent switcher but do not see any options to import updated list from the link you noted. Where would I download a list to? Thanks in advance!
Top

Download the list to a location of your choice on your hard disk. "Direct download" doesn't work for me (I just get a page full of gobbledegook in a new tab). So, I have always used the second method, Download via Save as File. 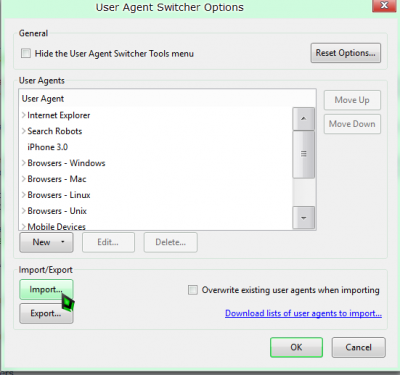 Not the particular page, https://www3.troweprice.com/aaweb1/port ... ummary.otc, but I can basically duplicate it by disabling Styles.

Using an extension that does such a thing?
Any change if you restart in Basilisk in Safe Mode?

The one by Linder is a WE extension so compatible with Fx 57+. It's not compatible with Fx 52.9 ESR and unlikely to be compatible with Basilisk as Basilisk can use only a few WE extensions. If you click on the link there at AMO for the version it is reviving you get an error message that AMO can't find it. That's because it was removed because it is not compatible with current Fx. If you look for it in Classic Addons Archive you can see it and get it. It's by Chris Pederick and is the one I use now and have used for many years. The version from Jan 4 2011 is the latest. But the list of user agents is much newer from 2017 at the link I gave you earlier.
Top
Locked
11 posts • Page 1 of 1