It seems the slimy bastards won't let you delete your account. I went to this: link https://www.facebook.com/help/delete_account with Pale Moon, Firefox and Chrome and all I get is a blank damn page. WTF!!!

Anyone know how to get rid of their shit? Bad enough I couldn't uninstall the App in my phone and had to disable it only so now I'm running a firewall on my phone to block any connections to it. The Samsung Package Disabler is $3.99 and I'm not paying for it with a 4.0 rating.

Your link does indeed take you to their 'Permanently delete account'.

Page looks ok to me. Why not leaving your account and not login into it anymore?

It won't delete all your data on the server. It just hides your account from outside viewing. Your data still exists in the server.... forever.

Managed to delete my account. Used VMware Player to do it. I saw a YouTube video about blank pages with Facebook and it seems like that was due to a caching issue. Yet I never store a cache or cookies, and I use Sandboxie for my browser so nothing should stick. Don't understand that one.

Latitude wrote:Why not leaving your account and not login into it anymore?


Because if the option to delete your account is there why not utilize it? I've read that they do in fact delete your data after like 90 days or something. What ever that's worth at least. And because of it they offer you the ability to backup your data by downloading it.
Top

You can't untill the "men in black" (who is behind these social platforms) will analyze and archive your data!

With linux Mint, I installed a utility program called, "Domain Blocker" and put Facebook's web address in it. Domain Blocker keeps "any" browser (Pale Moon, SeaMonkey, Firefox, etc) on any of my four computers from accessing Facebook's server and vice versa so Facebook can't run in the background clandestinely tracking me on the sly without my knowledge when I'm visiting websites.

Below is a screenshot showing how I was surfing the net, visited Fox News and read an article about Massachusetts senator Elizabeth Warren earlier this morning. Right in the middle of the article was a nice window informing me "Pale Moon can't establish a connection to the server at http://www.facebook.com". The screenshot of the article and the window is below. You'll have to left click on the attachment to make it larger.

If anything is a security threat when it comes to tracking people on the net, Facebook (and Mark Zuckerberg) should put their names at the top of the list in my opinion. So deleting your Facebook account is just a false sense of security on your part if you get my drift. Facebook's business model is to gather data on "everyone" on the net so they can sell the data to advertisers. 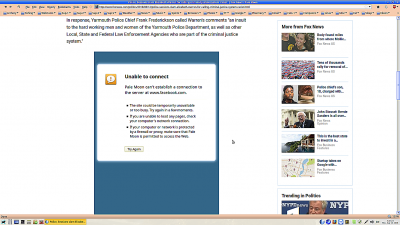 For that matter, many "tracker monitors" also misreport having a mere link TO a Facebook page as a "tracker" while that would only be a potential issue if your browser prefetches linked content (Pale Moon does not). Facebook won't see your visit to a page by that page just having a link on it.
On-topic: The page linked to works just fine (I recently used it). If you select "delete account" you have 14 days to get back into your account and cancelling deletion by logging in. Staying logged out for more than that time will start the deletion process which is unrecoverable. If the account was merely deactivated (which Facebook recommends) then the data will remain on their servers and you can be away for however long without your account data being deleted. but if you actually tell them to delete it, they will (they actually are obligated to, by law, AFAIK).
Last edited by Moonchild on 2018-08-13, 10:59, edited 3 times in total.
"There will be times when the position you advocate, no matter how well framed and supported, will not be accepted by the public simply because you are who you are." -- Merrill Rose

Night Wing wrote:With linux Mint, I installed a utility program called, "Domain Blocker" and put Facebook's web address in it. Domain Blocker keeps "any" browser (Pale Moon, SeaMonkey, Firefox, etc) on any of my four computers from accessing Facebook's server and vice versa so Facebook can't run in the background clandestinely tracking me on the sly without my knowledge when I'm visiting websites.

Large internet-based companies often use hundreds of domains to serve their content. If you are only blocking "www.facebook.com", it won't be nearly enough.
Linux Mint 19.2 Cinnamon (64-bit), Windows 7 (64-bit), Windows 10 build 1803 (64-bit)
"As long as there is someone who will appreciate the work involved in the creation, the effort is time well spent." ~ Tetsuzou Kamadani, Cave Story
Top

Isengrim wrote:
Off-topic:
Large internet-based companies often use hundreds of domains to serve their content. If you are only blocking "www.facebook.com", it won't be nearly enough.

Off-topic:
In my Domain Blocker, I've also added this address for Facebook too: (facebook.com). When it comes to privacy, I'm not a paranoid type, but after watching the congressional hearings with Zuckerberg concerning his comments on what he considers shadow users , I err on the side of caution.
Linux Mint 19.3 (Tricia) Xfce 64 Bit with 64 Bit linux Pale Moon
Top

What you store there aren't really deleted.

Incorrect, latitude. It is written as "Delete" my account. They suggest deactivating, but the option to delete is there. If you choose it, it will be deleted (after 14 days so people who regret something they did in a spur of the moment can still have their account)
"There will be times when the position you advocate, no matter how well framed and supported, will not be accepted by the public simply because you are who you are." -- Merrill Rose

If you have any Facebook Apps installed, you need to make sure you log out of those and uninstall/disable them first, then go to a computer and delete your account. I say this as a caution since if you log back in everything is reinstated. So people claiming there data was not removed either didn't take that step, or simply deactivated rather than deleting their account.
Last edited by Phantom on 2018-08-14, 05:38, edited 1 time in total.
Top

Any apps that are still inked to your account will automatically be unlinked/disabled when your account is removed -- because there is nothing left to link against.

The only way the account data can still be there after the grace period for deletion is if you did not actually delete the account but chose to deactivate it, instead.
"There will be times when the position you advocate, no matter how well framed and supported, will not be accepted by the public simply because you are who you are." -- Merrill Rose

If you are withen the 14 days, you can't login again. That's why I said you should remove the App.
Top

I do not believe Microsoft, Facebook, Google or any of them when they say you can delete your information. I believe, without any doubt at all, this is a bold faced lie. Data is money and nobody willingly destroys money. How do any of you actually know for a fact your information is really deleted when you request this? The answer is, you don't. You must trust what they say. Considering how often they have lied, why sould any rational person believe they will not continue doing so?

When it come to data. privacy and protecting yourself, I have to quote from the film "War Games."

The only winning move is not to play.

This is why i do not use any social media nor register with such sites.
“No one has ever become poor by giving.” Anonymous
“Everyone is entitled to his own opinion, but not to his own facts.”" Daniel Patrick Moynihan
"The good thing about science is that it’s true whether or not you believe in it." Neil DeGrasse Tyson
Top
Locked
15 posts • Page 1 of 1