Sup kids. Since we are all sick and tired of the development dry spell that has plauged the last several releases of Interlink.. We are doing a radical thing involving a complete refresh of the backend MailNews Core and I need your help.

Nooo not more money, but if you have some send it to tobin@binaryoutcast.com via Paypal. What I need is some good testers who aren't scared to risk their profiles!

The refresh first involves bringing in a fresh MailNews Core from a base of 52.9.1 and then start to upgrade it further with something like 122 backported bug and security fixes from Hyperbola's mail repository.

This will also mean we will attain a MailNews Core alignment with them, aside from any distro specific bits they feel they need to additionally add, and keep all our projects using the MailNews Core up to date and reduce redundant work for us all.

Also means that MailNews Core will be part of the Unified XUL Platform in an official capacity rather than shunned and stuffed elsewhere.. Just like it used to be over a decade ago before Mozilla lost its god damed mind.

Still the next version of Interlink will, finally, have something to write home about. I just don't want it to be that it busted everyone. So I am asking if a few big users of Interlink would be able to test some builds coming soon to make sure we aren't gonna have any annoying bustages and regressions.

So any takers?
return NS_OK;

.
Is there specific ways to report issues for the tests ?
Top

It's gonna be general usage testing. Take note how things work now and then run through your normal activities with the test build once they are ready. Checking actual results and the error console of course.

Report here to this thread your experience. Not especially difficult just the more people and ways it is used the better known the general state of things. Newsgroup and pop users especially wanted but non-google imap too. There will likely be a few builds generated through this cycle at what seem to be critical changes in code during the process as to be able to catch stuff.

Also, special thanks to "J. A." you just helped fund the domain renewal for binaryoutcast.com and most of thereisonlyxul.org! 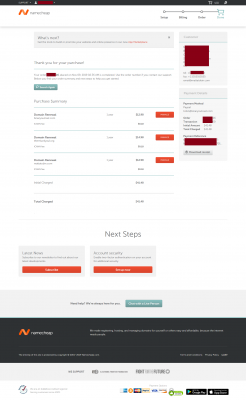 I could try out the test version(s). I'll only report when/if something goes wrong so I hope you are not expecting constant feedback. As for the Error Console, I do have some entries now (e.g. IndexedDB Maintenance finished with error: NS_ERROR_NOT_AVAILABLE: ActorsParent.cpp:18756) although everything works fine. Some might be caused by extensions.

Does this testing encourage the use of extensions or is a clean profile preferable?
Safe Mode / clean profile info: Help/Restart in Safe Mode
Information to include when asking for support - How to apply user agent overrides
How to auto-fill passwords

Tobin, if you want I can set aside some time to make a full backup of my decade-old mail storage with enigmail etc. and give it a test? Or do you think it's too much of a risk yet?
"Son, in life you do not fight battles because you expect to win, you fight them merely because they need to be fought." -- Snagglepuss

Well it would be super nice when the time comes to test it on a super old bit of profile data. This is still gonna be a bit though before test builds come out so no rush.

Might want to make a backup in any event though

Just let me now when.
"Son, in life you do not fight battles because you expect to win, you fight them merely because they need to be fought." -- Snagglepuss

I'd be interested. I play around with newsgroups and have a couple of e-mail accounts in Interlink. None of them are GMail accounts, but they're all IMAP. The one account I used to use POP with transitioned away from it. In some cases I'm actually just using IMAP as a fallback for Exchange ActiveSync (which is what I would use with Outlook). I don't really use any extensions with it, though.
"The rising sun will eventually set / A newborn's life will fade. / From sun to moon, moon to sun... / Give peaceful rest to the living dead." — The Legend of Zelda: Ocarina of Time

Here is a test win32 build for you all to try. It may end all life as we know it or worse.. break your profile. So backup before hand. This build marks the return of the Unstable branding but the updater is disabled so being disabled it won't update.
[OBSOLETE LINK REMOVED]

If you want a linux build let me know but cba until requested.

I'm mainly using linux, so, if you have some time to make a build...

Off-topic:
"can't be arsed" (to do something). Basically "I really don't feel like doing that right now"
"Son, in life you do not fight battles because you expect to win, you fight them merely because they need to be fought." -- Snagglepuss

So any reports?
return NS_OK;

Is the Windows version supposed to be executed on its own folder? Does it update the current user profile? Or do we copy/replace the files on the current profile? - guess not, since interlink.exe is in there.
Safe Mode / clean profile info: Help/Restart in Safe Mode
Information to include when asking for support - How to apply user agent overrides
How to auto-fill passwords

It is not portable if that is what you mean. Typically, u'd delete or temporarally move the installed version somewhere else and dump the zip in there. Reversing it when you're done.

While you can run it from another location, manually "installing/updating" to an established install location in Program Files will not trigger shellservice to question default client status so system integration and file/protocol assocations are none the wiser.

This would be the best course since the build needs more than a standard "nothing to report once over" the old beta team obsoleted them selves in the end with.
return NS_OK;

Any chance you'll provide a x64 version too? If not, I assume that x64 users should:

1. Backup profile folder
2. Uninstall the x64 (without deleting the profile folder of course)
3. Install the x86 (release version)
4. Extract/replace the test version inside C:\Program Files (x86)\Interlink
Safe Mode / clean profile info: Help/Restart in Safe Mode
Information to include when asking for support - How to apply user agent overrides
How to auto-fill passwords

I /can/ but it won't make a difference for testing. As for your assumptions, It doesn't matter.. Just do what I said in my last post.
return NS_OK;

Usage report: Startup prior to the MP prompt is slightly faster. After entering the MP, the main window paint takes about the same amount of time as -release.

Tested the following components on my 4GB large mailstore with no ill effects: NOT tested: Feeds, usenet.
"Son, in life you do not fight battles because you expect to win, you fight them merely because they need to be fought." -- Snagglepuss

Feeds seem to work fine and reports are newsgroups seem fine too! Thank you Moonchild. THIS is how you test. Now if only I could find a way to include cube and button based testing with deadly consequences.. It would be perfect.
return NS_OK;

Ok, did some quick testing and everything works good as usual, including extensions, Yahoo IMAP and Newsgroups. Didn't test POP3.

Since adding the two newsgroup accounts I'm getting this prompt at startup (281GB ?), but this occurred on the release version too.

Safe Mode / clean profile info: Help/Restart in Safe Mode
Information to include when asking for support - How to apply user agent overrides
How to auto-fill passwords