Please stick to the relevance of this forum here, which focuses on everything around the Pale Moon project and its user community. "Random" subjects don't belong here, and should be posted in the Off-Topic board.
Post Reply
26 posts

Just when I thought it couldn't get any worse, they hit the lusers with another colossal fuckup.
I randomly restarted FF only to get majorly confused, thinking I pressed some obscure key combination that disabled styles, enabled "something", or simply woke some unholy daemons, because the stupid browser suddenly looks like shit. The damn tabs bar got taller with tons of wasted space, lost any kind of background and dividers between the tabs, and I basically can't tell what's what anymore.
After a while I dug up the version history on Wiki, and to my horror found this:

Firefox 89 was released on June 1, 2021 for desktop and Android. Among the many additions and removals were: core experience redesigned and remodernized to be cleaner, more inviting, and easier to use; simplified browser chrome and toolbar; clear, streamlined menus; updated prompts; inspired tab design;

Holy fucking shit, spare us from fixing what isn't broken!
I really would like to know what does a person without ANY taste and sense for aesthetics looks like.
Fuck me this is bad. BAD!!
I relied on FF for Facebook and few random pages that didn't work too well in PM, but it seems like I will have to go back. Unless I want to poke my eyes out of course, which is an idea I am not too excited about.
Kill
me
slowly
!!!
Top

See bug #1701266 -- which was marked WONTFIX in the nightly stages before there was a decent amount of users testing it, and even halfway decent points made (including my own input) are all happily marked as "advocacy" by Mozilla. They want "Proton" as their UI despite the terrible UX it brings (including breaking with decades-long standard conventions like making clear which window has focus...) and they are obviously going to force-feed it to everyone because some soydev decided this was what they wanted.
"Son, in life you do not fight battles because you expect to win, you fight them merely because they need to be fought." -- Snagglepuss

I found this though https://github.com/black7375/Firefox-UI-Fix
Might be a solution or at least a workaround.
Top

With Proton, the Default theme switches between Light and Dark based on the system settings. We've removed support for showing the Windows accent color.

I have no good words.

Maybe at some point though I'll port it over like I did with Australis and Photon. For everyone's horror pleasure.

Please don't. It has absolutely zero redeeming qualities.
"Son, in life you do not fight battles because you expect to win, you fight them merely because they need to be fought." -- Snagglepuss

When you go so far down the shithole that Australis looks good by comparison.. I think that means you've gone to far.

Proton theme is already there, it would be interesting to know how many people are using it.

Full theme support is one thing to rub in the FF shill's faces - we can make PM look like the abortion that FF is today, but the vice versa is impossible.
"One hosts to look them up, one DNS to find them and in the darkness BIND them."

I am talking about this: 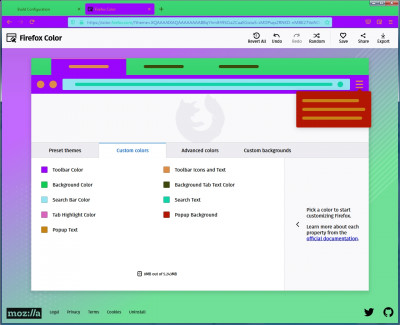 NOTE: This is from a pre-release.
I'M COMBINING THE FORCE FIELD WITH ENERGY POWER!

Ryan is ONLY permitted to make a Proton theme if it uses THAT color scheme and no other.
I'M COMBINING THE FORCE FIELD WITH ENERGY POWER! 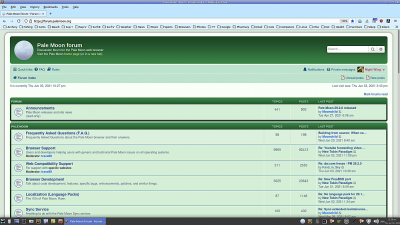 It's the first thing I get rid of on a fresh install and replace with ungoogled-chromium as the backup browser. I've made a custom 20.1 ISO with the latest patches, removed unnecessary language packs/dictionaries for LibreOffice, Firefox and other stupid fluff introduced with 20.1, and added Pale Moon and some other packages/repositories I use.
"One hosts to look them up, one DNS to find them and in the darkness BIND them."

I use Edge as a Googlesoft runner mainly Google Voice, Google Hangouts, Discord, Youtube, Paypal, and pay my electric bill.. Everything else works on Goanna even Key Bank.. their warning is bullshit and you can just click back and log in like normal.

We should push "Works on Goanna" rather than "Works on Pale Moon/Basilisk/Borealis" unless it is specifically relevant.
I'M COMBINING THE FORCE FIELD WITH ENERGY POWER!

I still haven't had any issues with PayPal on Goanna. Fingers crossed.
"Son, in life you do not fight battles because you expect to win, you fight them merely because they need to be fought." -- Snagglepuss

It isn't broken just the Captcha harassment and this is a new browser every single time.
I'M COMBINING THE FORCE FIELD WITH ENERGY POWER!

It's the first thing I get rid of on a fresh install and replace with ungoogled-chromium as the backup browser.

There is an old saying; "To Each, Their Own".

But knowing Mozilla, I'm going to guess sometime in a future release for Firefox, Mozilla will remove the Compact Design setting in "about:config". I know of a person who worked at Mozilla and he told me, lots of developers who work for Mozilla, they remove items in Firefox because "it makes their jobs easier". Then Mozilla will send out a PR release for Firefox to spin it so it "lauds the new changes for it's users".

In my first post in this topic thread showing the attachment for Firefox 89, I do not mind all that much tabs are now on top in Firefox 89. But I'm not going to "jump through hoops" to get the tabs on bottom back. What I don't care care for in Firefox 89 is the very skinny scroll bars. But Since I use a desktop tower computer and external monitor, I use a mouse so I can scroll down a page by using the mouse wheel instead of the scroll bars in Firefox.

In my first post, the green theme color for the Forum Pale Moon site, this is one of the theme colors for the software Moonchild uses for his forum site which I prefer. It is prosilver SE (forest) which my poor eyesight likes. The Blue color for Firefox is a a bland blue color named, Windows 8 Basic Blue which isn't so garrish looking. But I can make it a plain looking gray color which you can see in the attachment at the end of this post.

In closing, since Firefox is not my default browser in Mint, I don't use it that much. I only use Firefox when Pale Moon "stumbles" on some sites. Examples for some of these sites which Pale Moon has a problem with is the comment sections for both Fox News and The Sun newspaper, Marine Traffic site which goes blank sometime, but not all the time, etc.

And these stumbles are when the maintainers of these sites have changed "something" to their sites which Pale Moon does not like. The old, "change for the sake of change". Then I will use Firefox for those sites. 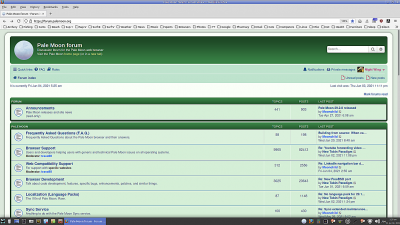 That's what I use ungoogled chromium for. Given that that amounts to barely 1% of the sites I frequent, so I don't care about how trimmed down it is since it is otherwise never used.

I also keep Waterfox Classic around for watching Amazon Prime since it has DRM support.
"One hosts to look them up, one DNS to find them and in the darkness BIND them."

What is the advantage of ungoogled-chromium over srware iron browser for instance.?.I will not use a chromium based browser but just curious.
Xenial puppy linux 32-bit.

It removes all references to Google services and turns off certain anti privacy features, otherwise offers nothing new over base Chromium.
"One hosts to look them up, one DNS to find them and in the darkness BIND them."