Fair enough, but you brought it up so I was reminding you.

- If you find yourself speaking with a person who does not sense, in all likelihood, that person is not real. -
https://binaryoutcast.com/ | http://thereisonlyxul.org/ | Freenode #binaryoutcast
Top

I would use something else, if I knew it does the same thing, and does it just as well or better.
Top

KlarkKentThe3rd wrote:I would use something else, if I knew it does the same thing, and does it just as well or better.


Yes, you should use what you want.

But for info: uMatrix (see wiki) / eMatrix; and uBlock used with dynamic filtering (must enable advanced features) are also about protection.
Top

Because I wanted the CPU usage to go down, and the lag to go away. I thought If I used a PaleMoon specific add-on, the browser would be more healthy.
Top

KlarkKentThe3rd wrote:I use what I want.

You'll just have to understand the consequences of using what you want. For NoScript this means we will no longer provide support/help you with any issues you have with the browser.
"If you want to build a better world for yourself, you have to be willing to build one for everybody." -- Coyote Osborne

Off-topic:
FWIW, I stopped using NoScript a while ago and use uBlock Origin to block 3rd party scripts and frames. You have to tick the box "I am an advanced user" under Settings. Works just as well as NoScript without the issues NoScript causes.
Top

Off-topic:
I'll try uBlock in Advanced Mode one of these days.
Top

Please move any further discussion not directly related to ABL and its releases to its own thread, thank you.
"If you want to build a better world for yourself, you have to be willing to build one for everybody." -- Coyote Osborne

The exploit uses a filter option called $rewrite that Adblock Plus supports to inject arbitrary code in web pages.
...
The extension uBlock Origin is not affected by the issue as it does not support $rewrite.

Guess both ABL and ABPrime are affected by this.
Top

Tomaso wrote:Guess both ABL and ABPrime are affected by this.

Not necessarily, if they were forked at a point prior to support for $rewrite being added. We would need verification from Moonchild & Tobin on that.

EDIT: Actually, it's very likely that ABL and ABPrime are not affected. Support for the $rewrite filter option was added to Adblock Plus in version 3.2, and ABL/ABPrime were originally forked from earlier versions (in the 2.4-2.6 range, IIRC).

EDIT #2: After doing a quick search of the repositories for both extensions, I'm not seeing any references to $rewrite in the code. That's a good sign.
Nichi nichi kore ko jitsu = Every day is a good day.
Top

Tomaso wrote:Guess both ABL and ABPrime are affected by this.

They are not.
"If you want to build a better world for yourself, you have to be willing to build one for everybody." -- Coyote Osborne

EDIT:
As it turns out, gorhill forsaw this problem almost a year ago:
https://github.com/uBlockOrigin/uBlock- ... -391303700
That's why he refused to implement the $rewrite syntax in uBO!
Top

Hi there.
I´ve been using a combo of ABL (before was using ABP) + ABP element hiding helper + ABP pop-up addon for many years now.

ABP pop-up addon seems to improve the capabilities of ABL / ABP to block advert pop-ups without impacting PM performance (or at least it's my subjective impression).
Development stopped quite a bit before Mozilla abandoning the old (better) extensions for FF.
http://jessehakanen.net/adblockpluspopupaddon/

Do you consider these features worth adding to ABL, out-of-the-box?
I think it adds some functionality and it would future-proof these functions.

Why not fork them and submit them to the Add-ons Site.. For the second one, see if the developer will be kind enough to return a response this time.

- If you find yourself speaking with a person who does not sense, in all likelihood, that person is not real. -
https://binaryoutcast.com/ | http://thereisonlyxul.org/ | Freenode #binaryoutcast
Top

PhotoBoothe
New to the forum

How in the name of all that's holy do I get the ABL "button" to show - somewhere, anywhere...? (I don't care if it's top right or bottom left, hah!)
It is not showing in the items available through the customize menu.
I never was able to get the add-on bar to display in Pale Moon - now it looks like they've done away with that anyways...? I'd gripe about the add-ons bar apparently going away, but I guess that's a separate topic. Starting to wish I treated PM the same as I'd been doing with Firefox and refused to update, but too late for that I guess.
I've found a couple old threads on that ABL button subject, but they all concern older versions of both PM and ABL, and they're annoyingly locked, so I couldn't request an updated answer there... (I have PM 28.5.2 and ABL 5.0.)
I have tried accessing ABL "options" through the add-ons manager and cannot find anything along the lines of a whitelist or "disable on this site" menu there.
Thank you...!
Top

I'm not entirely sure why you are so upset -- the status bar/add-on bar hasn't gone anywhere and won't go anywhere. Perhaps you have inadvertently disabled its display (from the menu or with Ctrl+/). ABL will have its icon either on that bar or in the main navigation toolbar by default.
"If you want to build a better world for yourself, you have to be willing to build one for everybody." -- Coyote Osborne

@PhotoBoothe, that's quite a splash into the forum pool for your first post!

For you and others who might not connect the dots on their first attempt, an easy way to get to ABL features is from an icon on the status bar: 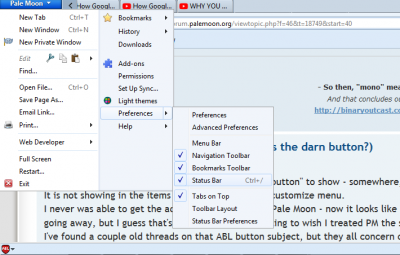 Adblock Latitude has been updated to v5.0.2!

This adds a brand new filter subscription in the quick-select menu that is maintained by yours truly. It also moves EasyList, which has been less effective due to their insistence on rewriting rules to using ABP features ABL doesn't support, to the background (you can still add it by selecting "add other").

No other changes were made and existing subscriptions will remain in effect, of course.
"If you want to build a better world for yourself, you have to be willing to build one for everybody." -- Coyote Osborne

To keep further announcements clear and this thread clean of off-topic comments, a request:
This is intended to be a release announcement thread only, and maybe some related feedback directly applicable to the topic/release at hand.
If you want to discuss anything else around ABL or, as the case may be, sideways related OTHER ad blockers, please do so in a different thread. Any off-topic posts here may be deleted henceforth.
"If you want to build a better world for yourself, you have to be willing to build one for everybody." -- Coyote Osborne