Moonraker wrote: Of course people expect the extension to work in palemoon

I think the problem lies therein.
That's a wrong expectation.
Why should a Firefox extension work in Pale Moon?
Even though Pale Moon has a dual-GUID system that allows Firefox extensions to be installed, the fact that they work should be a pleasant surprise, rather than the norm.
After all, they are Firefox extensions.
Top

Wow! Thank you very much JustOff for this, and for all of your excellent hard work and dedication to the whole PM project! It is very much appreciated by myself, and by many others! Thanks again!
Top

Moonraker wrote:I have never said i wanted things on a silver platter,...

You've suggested that somebody should check 16K extensions written for Firefox if they also work with Pale Moon and recheck as often as Pale Moon will make some changes to its code.
This is naive at best and dumb at worst.
As for the need of an alphabetical list which you are suggesting - how would it be of any convenience for you?
You have the convenient option to search for extensions instead of going through 16K extensions in alphabetical order.
So yet another naive at best and dumb at worst suggestion.

its a perfectly reasonable thing to expect.Do you seriously expect people to trawl through the archive and then discover the extension may not work..?
Of course people expect the extension to work in palemoon and if it doesnt then your just wasting people's time.
maybe it's a sign of things to come as the divergence continues.

i hate the word entitled and generally never use it to describe anyone, but if this post right here isn't the textbook definition of entitled behavior then i don't know what is.

have you ever browsed the old AMO, tried to install an addon to see that it doesn't work, then file a complaint to Mozilla for wasting your time by not marking it Pale Moon compatible? obviously not because you have a functional brain, or so i like to think.

now this fantastic addon by justoff is an EXACT archive of that old AMO. nowhere did he claim that the addons will definitely work with Pale Moon. you talk about 'people' expecting the extensions to work in Pale Moon? speak for yourself. i for one understand perfectly that, just like the old AMO itself (because that's what this archive is, only in the form of an extension), compatibility is NOT guaranteed and the end user has to actually try to install it to see if it works - just like how it would be done in the past.

once again, this excellent extension is a REPLICA of the old AMO site and does not promise any wizardry when it comes to PM compatibility of the archived extensions. i've no clue how you arrived to the conclusion that it should support this or that and, then start asking for inane 'features' to be implemented that benefit nobody but yourself. Tobin has every right to be flabbergasted by your idiotic request, but gepus put it most succinctly when he said you know nothing.
Top

Hello, I have a request for JustOff.

I discovered that when I have CAA in one of my extra toolbars, it forces the toolbar to unhide.
When Greedy Cache did that, I recall you generously created a preference (extensions.greedy-cache.unhideToolbar) that I could set to false. I was wondering if you would be kind enough to make a similar preference for Classic Add-ons Archive?

Try ca-archive-2.0.2b1.xpi and use extensions.ca-archive.unhideToolbar pref. However, unlike Greedy Cache, you will need to restart the extension or browser for the changes to apply. This is because CAA does not have a module for tracking preferences and I found it unreasonable to add it only for this hidden option.
Here are the add-ons I made in a spare time. That was fun!
Top

Strange, when I search for "Google Image Search" there isn't caa:addon/google-image-search-1 in the search results:
caa:list?q=Google%20Image%20Search

But when I search for "Google Image", there is caa:addon/google-image-search-1 in the search results:
caa:list?q=Google%20Image

Do you know why this is happening?
Top

Off-topic:
If you want to quickly search for Google images, you can create a quicksearch bookmark with this URL -

and assign a keyword in the bookmark properties. I use 'img', so can search for an image by typing 'img <search term>'.
"One hosts to look them up, one DNS to find them and in the darkness BIND them."

There are actually two spaces between "Image" and "Search" in the add-on name. 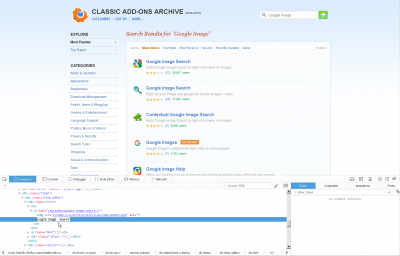 Such cases require the search be improved, I cannot promise this will be done soon though.
Here are the add-ons I made in a spare time. That was fun!
Top

I spent a fair amount of time searching for the answer, because I'm new to PaleMoon/CAA:

CAA's download host went down and you need to manually update/install the new CAA extension version from their repository.

With the old verison of CAA you'd be able to browse, but the "Download" button did nothing and timed out. I hope this post will save people some time.

It was confusing to me that CAA's repo has no links to "caa:" URL (well this makes sense, it's not a website, but the addon appearing as a website. Only the extension file downloads are external...)
Top

* Migrate to a new service domain

Yes exactly, both of my links point to this exact bug report and then to the releases of CAA. However I would have never guessed what's the problem if I didn't find and read their github repo and issues.

I don't expect people to go through all that on their own just to find out they need to manually update the addon. Search engine results are all misleading.
Top

Just posting the actual explanation, for everyone to see.
Top

My understanding from here (under "Indexing your Add-on"), is that externally listed extensions like Classic Add-ons Archive still receive automatic updates from the author's specified source, so in this case GitHub.

(Bear in mind, the browser checks once every 24 hours, so it's not like an update happens the split second it's released.)
Top

The only question I have is: where do I press to download Singing Stallman?
Top

coffeebreak wrote: ↑
2020-06-26, 16:49
My understanding from here (under "Indexing your Add-on"), is that externally listed extensions like Classic Add-ons Archive still receive automatic updates from the author's specified source, so in this case GitHub.
What are your extension update settings? Did you disable automatic updates? And did you disable update notifications?
Or were automatic updates not working?
(Bear in mind, the browser checks once every 24 hours, so it's not like an update happens the split second it's released.)

You are probably right about auto-updates (all my settings appear "active" and the browser would have had time since Tuesday to update)... but not in this case! (Also checking for updates manually did nothing for the CAA addon)
Here the author says to update manually. Looking at update.xml, I'd say he just didn't "push out" the new manifest, so the clients don't know there's a new version available. I will ask them for clarification.

You're very right.
I do seem to recall that this extension used to auto-update, so hopefully after this one-time situation auto-updates will resume.

Just a word on this...
"CAA" is just an informal abbreviation and apparently wasn't added to possible search terms.
But If you search APMO for Classic Add-ons Archive by its actual name, or for any one of the words comprising it, it does appear in the search results.

There is also a link available in CAA's entry in the Add-ons Manager (about:addons, or keyboard -> Ctrl+Shift+A).
The entry includes a blue link that says: More .
When clicked it shows more detail about the extension, in this case including a link to its repo.

Cheers for the explanation, my (bigger) problem was to find the repository. Because even that has no references or screenshots.


JustOff wrote:The need for manual updating to version 2.0.2 is caused by the fact that update.xml was served through the same biz.tm domain, which, after 16 years of acting as a public registry, was suddenly sold to a new owner.

Future updates will come automatically, just as it was before.

Actually looking at that link allowed me to download the extension. Perhaps the main Github page should be more transparent about where to go and where to click to download the damn thing.
Top

I am in Heaven.

Of couse if he would just upload the extension only to the Add-ons Site it wouldn't have been a problem.

But whatever I guess.
Is it that you have no idea where you are going or what you're supposed to be doing right now?
Or did you just assume when you saw that timer that something in this room is capable of turning it off?