by Weishaupt
uBlock Origin with the tracking and social lists should do the trick, I think.

by TwoTankAmin
I am a huge fan of those two extensions. So much so that I will not upgrade to P M ver. 27 until I can find acceptable (to me) replacements for them. I just took a look at uBlock Origin. It was like trying to read Chinese. And uBlock seems to be first and foremost and d blocker, that is not the primary purpose of Ghostery. I have used Ghostery for years and it is dirt simple to use and works great.

Blocking all trackers.
When you block a tracker, that tracker is prevented from communicating with its third-party provider.

I have one white listed site- DuckDuckGo and I do not think I ever visit their site, I just use their search now and then. I choose to block everything possible, i.e. all trackers and all cookies.

As for Crush those Cookies, I cannot tell if it is a decent replacement for SDC or not. I should note that I do not do tabbed browsing, I use multiple windows. The only time I ever see a tab is when I use the PM Tools which open in a tab.

What makes this all a more difficult choice for me is that P M 27 would make it possible for me again to use the Morgan Stanley site which will not load now.

TwoTankAmin wrote:I just took a look at uBlock Origin. It was like trying to read Chinese.

Yeah, I hear you.
Been using 'Ghostery' for a long time, and I'm trying to find a replacement for it.
Right now, I'm trying out 'uBlock Origin' with PM v27, but it's very confusing..
For instance, its drop-down menu contains a lot of clickable mystery buttons, but the tooltip for every single one of them simply says "uBlock Origin"!

by dark_moon
uBlock doesn't need any maintenance.
You only need once set which filter you need and then the addon update that lists automatically and block ads for you.

dark_moon wrote:uBlock doesn't need any maintenance.
You only need once set which filter you need and then the addon update that lists automatically and block ads for you.

I want to be able to override the default rules for certain trackers, like with Ghostery, but what the hell is all this stuff??: by eskaton
Have you reviewed these pages?

by Tomaso
IMO, It's ridiculously cryptic, and unnecessary complex.
I just want an extension that blocks all known trackers and ad-cookies by default, and the abillity to make exeptions on the fly!
Don't want to spend all my time with this stuff.

by eskaton
You can make exceptions on the fly, per site with the dynamic blocking. One column is for global blocking and the other is for that site only. It's more complicated/feature-rich than ghostery, but it's not impossible. I managed to migrate within a few day's worth of use.

dark_moon wrote: Doesn't know what you mean by every single one of them simply says "uBlock Origin"

I want to be able to override the default rules for certain trackers, like with Ghostery, but what the hell is all this stuff??:

The tooltips are working fine for me, e.g. for bottom left button:

And why do you have advanced user on if you find it confusing?

by dark_moon
In normal case you doesn't need any settings in uBlock.
If you click on the big power button you disable uBlock for the moment- or you can allow individual sites. And you can open the log which show you all blocked elements.
Also read the manual for more options.

But again: uBlock doesn't need any settings by default.

by thosrtanner
I am somewhat dismayed by the potential lack of ghostery. I'm currently trying ublock but it seems to up my crash tally from infrequent to every 15 minutes or so which isn't so hot.

by TwoTankAmin
I have run Ghostery for years. It took me about 3 minutes to install and get working with 0 problems. I understood it all. Keeping it updated it simple as well. I do not have to decide what filters I need, I have no clue how to decide. I do not need something that has more features, I need something that is as easy and effective to use.

Bear in mind that not all P M users are experienced in all this stuff. My bet is I am able to understand and figure out how to use something in the neighborhood of 15% of the features/controls in Pale Moon (and Commander), but that is enough for me to use the browser. It pretty much works fine for everything I do and I have no troubles. But when I explore it all, I am usually unable to understand what most of the settings are for or how to use them properly, I rely on the defaults.

I consider Ghostery and SDC to be two of the most essential components of my browsing. I consider the loss of these functions (what these extensions do not the specific extensions themselves) not to be acceptable. I prefer not to upgrade to P M 27 unless I can find substitutes which are equally effective and functionally equivalent to operate. Once again, let me make it clear I do not have any argument with the changes coming in P M 27. For most users they will be a welcome improvement, just not for me at this time. Nor am I asking or even suggesting the P M coders and designers do anything to prevent the loss of these extensions nor to write new ones which would work. This is my issue, not theirs.

I would suggest this, the reason browsers like IE, Chrome, FireFox are used by so many is that they are simple to work for those who just want that and have no concern over privacy or directed ads. Versatility, as is supplied by add-ons, are most often equally simple and easy for we, the unsophisticated, to use. But once it starts getting more technical, we are lost. You guys who understand all this stuff need to remind yourselves, now and then, that some of your users are not all that versed in the technology, we just want a better, safer to use browser than the majors offer. We do not want to have to master all sorts of technology to be able to use it to meet our somewhat basic needs.

A quick story to make my level of sophistication clear. I just spent 4 days at a convention relating to catfish near Washington, DC. People came from Europe, Canada as well as all over the USA. At one point some folks asked me to snap a picture of them with an offered smart phone. I had to decline because I have never owned one and had no idea how to make it take a picture. I have no problem with folks having smart phones, I just do not want one.

by moon convert
Hey guys, I've actually been running Ghostery and Ublock Origin together in my browser for a long time now. Are we sure the blocking/filtering behaviors are equivalent? As I'm browsing the web, I often notice that the little notification numbers showing how many things each of these extensions is blocking are different. Sometimes Ghostery blocks more, and sometimes Ublock Origin blocks more.

by dark_moon
This is based on the filterlists you use and false positives.
Block much isn't a sign for a good blocker.
Just disable ghostery and look if all bad stuff is blocked.

This is my uBlock config (german but the options are equal): 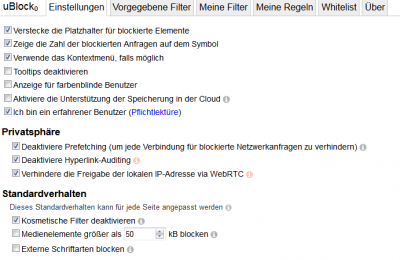 In "my filter" i have this:

by moon convert
Thanks for the clarification. I've done a little bit of additional testing, and if I pause blocking in ghostery, expand the panel so that I can see the individual URLs, and then look at ublock origins indicators, there seems to be an almost one-to-one correspondence in behavior. Thanks also for the screenshots. I'll be adjusting my third-party filters so that my settings are much closer to yours. If I understand your suggestion for the my filters section, those rules make blocking more stringent for Google analytics and double-click, correct? It's nice to know that I can reduce my add-on count without losing any security or privacy.

by dave on linux
I personally prefer uMatrix, I find it more logically presented than uBlock Origin.

But I have to agree Ghostery is the most carefree solution that makes the least troubles for those that don't want (to learn how) to keep tweaking settings (as such to casual computer users I kept recommending it over all the more advance solutions available). As such it would be really nice to have a like for like replacement of Ghostery for Pale Moon.

by JustOff
I would recommend to stay away from Ghostery. They make money by tracking the trackers while blocking them and then sell this data to marketing and advertising companies. Moreover, last time I checked, I saw regular requests to their servers while browsing, even without opt-in.

Pale Moon is not mentioned. If I remember correctly. There was an issue with P M and higher than 5.4.4.1 which resulted in my never updating above that version. I also recall. perhaps erroneously, that data collection for "resale" only began with higher versions as well. I am as likely to have this all wrong as all right......

TwoTankAmin wrote:If I remember right, their tracking began in the not so distant past.