FYI to LoudNoise and other Mozillazine regulars

FYI to LoudNoise and other Mozillazine regulars

I hate to write a post like this, but the sheer amount of misinformation regarding third-party builds (including Pale Moon) that has been doing the rounds on Mozillazine, thanks to the regulars there, has prompted me to write this post.

A cursory look at Mozillazine shows that large fraction of posts serve a heavy dose of misinformation. Pointing out the erroneous statements inevitably results in locked threads and name calling, so I have no option but to write and respond to the the regulars here.

(For future reference: at the time of this writing, both the versions of Pale Moon and Firefox ESR are 24.5.0 and the latest stable version of Firefox is 29.0.1.)

There are some posts claiming that the compiler optimisations in Pale Moon have no benefit, for example:

There are two things to consider:
There are also others who claim that Pale Moon is just a SSE2 build of Firefox with removed features:

And some others want to compare Pale Moon as just another Firefox rebuild with extensions slapped onto it:

A full list of differences between Pale Moon and Firefox is listed here.

In fact, the development of Pale Moon and Firefox are completely independent. While Pale Moon bases itself on the Firefox codebase, it will evolve according to its own development roadmap. Some people keep claiming that Pale Moon will jump on to whatever (ESR) version that is released:

This conception enforced by some of the regulars is completely wrong: as stated above, Pale Moon will take its own development road. The regulars will find this hard to swallow, and complain about man power and required work, but work is required to maintain anything. It may be relatively more work than has been handled by the developers of Pale Moon till now; but the modular nature of the Mozilla codebase comes to the rescue in this. However, that does not prevent some of the extension developers (who should really know better) from commenting:

Pale Moon intends to become a real fork, in fact, already has a number of major changes. Pale Moon will retain the old UI, no matter what. Work may be involved to keep it free from the Australis UI, but it can be done. Moaning "it'll require work" is only an absurd statement, since nothing can be done without putting in work.

To answer the only real question (not presented as such) asked: Pale Moon will have a dual-GUID system; allowing Pale Moon specific extensions, while keeping Firefox compatibility. This may or may not be changed in the future.

Also, when nothing really works, just mention anything, anything; people flocking to Pale Moon must be stopped at any cost, right? Who the fuck cares about actual knowledge of the Mozilla codebase or of Pale Moon's optimisations, when mud slinging is easily done without it:

Accessibility features are something that is not considered important at this point of time, but if becomes in demand later, it can be easily turned on by removing --disable-accessibility from .mozconfig. However, I'm aware that nothing works like making a mountain out of a molehill. (Guessing by the nature of these posts, the Pale Moon developers may also expect a "won't someone think of the children" post.)

Also, such posts only go on to show how idiotic the regulars at Mozillazine are. Maybe "LoudNoise" thinks that features are removed by deleting folders; even it were so, a grep -Ev '^./accessible' will fix things. But I'm talking about "LoudNoise", now.

There are a number of things that I will simply not choose to respond to, for example, wild allegations like this: these people have turned Mozillazine into a ground for pissing contents; I'm not sufficiently masochistic to participate in these.

Mozillazine has been a cesspool for years. I've been a lurker and poster there for 9 years, and my experience was far from satisfactory.

Nearly everyone acts like a jackass (even the mods) and hardly anyone provides help regarding problems that arise with the browser. Posters would very often tiptoe around the issue or post a link to the useless/out of date Support pages. Here's a novel concept--give me a DIRECT ANSWER that precisely tells me what to do to fix my problem! I don't wanna read some other link that may or may not (very often not) have the info; that's why we create those threads--so we can be helped. Apparently, that silly idea was so pervasive that I actually had to provide the answer myself a few times! (Here's an example.)

Mozillazine drives me bonkers, and their pathetic attempts to discredit Firefox forks while kissing Asstralis' buttcheeks are laughable.
Top

Most of the links indeed show pissing contest attitudes, but one thing jumped out to me:

http://forums.mozillazine.org/viewtopic ... 1&start=30
one of the last posts there before it was locked:

LoudNoise wrote:When someone tries to hijack an unrelated thread to sing the praises of a release version of a product we do not support I would call that fanboyism.

Why is it still called MozillaZine instead of FirefoxZine? Shouldn't they support "anything Mozilla" being the Mozilla Community forum? I think it really shows the true colors of the staff and regulars there.
Third party builds are "not supported by them" and any serious discussion about it is labeled "fanboi-ism". Well, time for a change in management if they don't want to fold before their stated alleged folding of alternative browsers.
"Just because you know something is going to break in the end, doesn't mean that it can't have an effect that lasts into the future. Joy. Wonder. Laughter. Hope. The world can be better because of what you built in the past." -- Tom Scott

How many of the MozillaZine regulars do you think will read this post? I heard some of them even say that they're not a "fan of long posts" and "wall of texts".
Top

You're mistaken, Moonchild: it is Mozilla as in "Mozilla Corporation" and not "Mozilla community".
Top

You're mistaken, Moonchild: it is Mozilla as in "Mozilla Corporation" and not "Mozilla community".


mozillazine forum home page wrote:mozillaZine is an independent Mozilla community and advocacy site. We're not affiliated or endorsed by the Mozilla Corporation but we love them just the same.

"Just because you know something is going to break in the end, doesn't mean that it can't have an effect that lasts into the future. Joy. Wonder. Laughter. Hope. The world can be better because of what you built in the past." -- Tom Scott

A full list of differences between Pale Moon and Firefox... as an image instead of Google Docs: 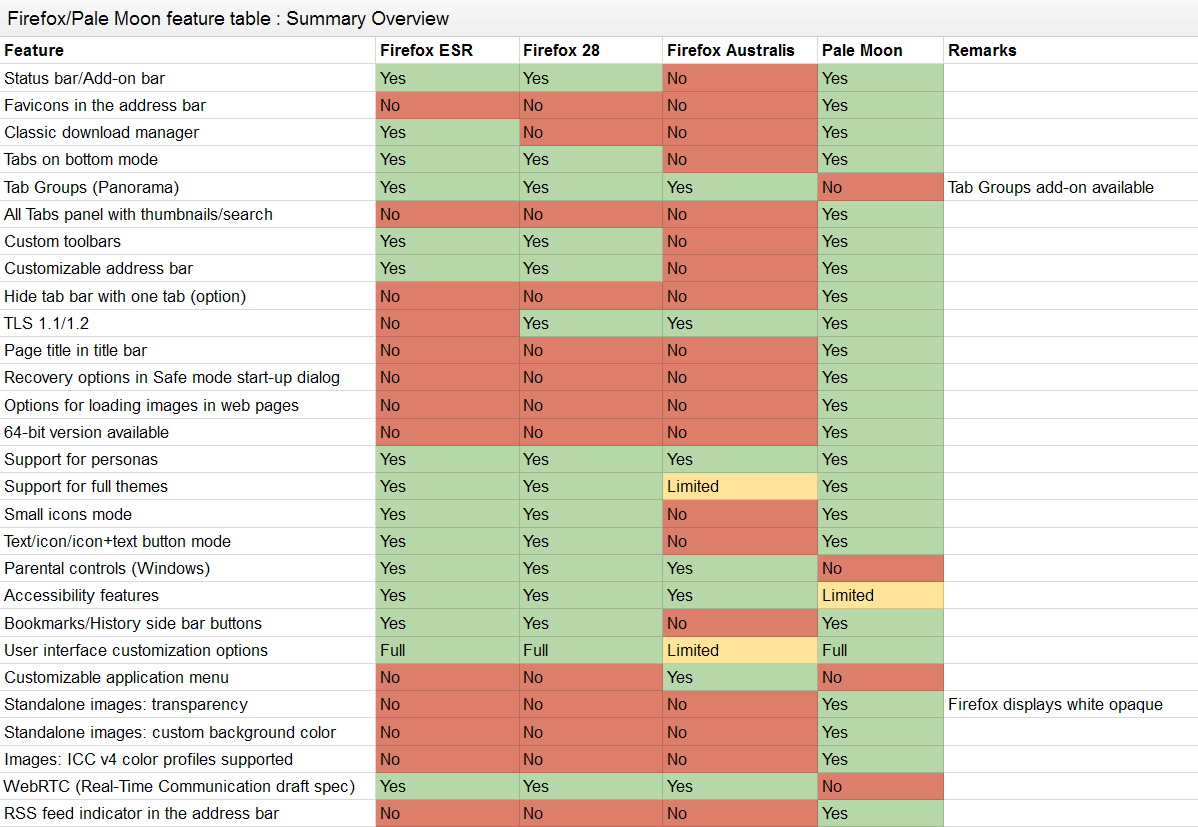 I would be nice if each line in the table was a link to a feature description.

I wonder what is the "Customisable application menu"?
Top

opera1215b1748 wrote:I wonder what is the "Customisable application menu"?

That's referring to the new hamburger menu in Australis. 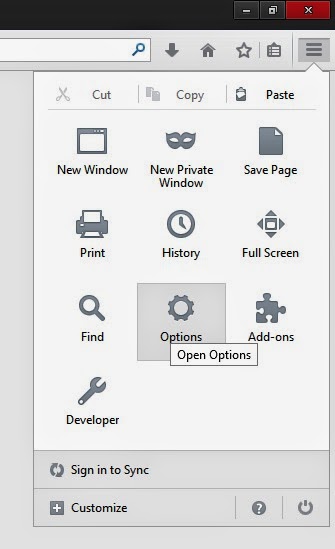 I used the text from the first post here and the comparison graph to set a forum commenter straight who thinks PM is just Firefox with different icons.

Funny how strong the push for conformity is, be it Firefox 31 or Windows 8.1...
Top

Yeah, they get angry every time someone mentions PM.
That must be a sort of a butt-hurt for them.
Top

You need humongous doses of propaganda if you're to brainwash people into moving against their own interests.
Top

What is funny is that some of these regulars at mozillazine, who haunt the forum, are also criticizing various obvious australis flaws. (Still note that the 3 here are far from being as annoying as some others, from what I seen)


Frank Lion wrote:I would add, I've seen a lot of UI stuff over the years, but the first time I used that Australis menu a year or so back, I pressed Exit expecting it exit the menu. Wasn't a problem for me, but It didn't do that.

The point is this - yes, children are a very useful and easy demographic to target for a userbase as they are easily pleased, but working adults use Firefox as well. The guy at work with 40 work-related tabs open and a default Start Page has now just exited (not crashed, so no session restore) out of Firefox when they didn't mean to, for no good reason.

Less time farting around with bookmark animations and more time on trying to make a good Internet browser, I reckon.

patrickjdempsey wrote:I pressed that Exit button about 20 times before I realized it wasn't crashing. And I'm not exactly a stranger to UI either.

smsmith wrote:As I recall, they were at one time labeled, and then someone decided they didn't need to be labeled. I'll see how strong my search-fu can be and see if I can find that bug report.

patrickjdempsey wrote:Originally, it was just the label "Exit" which made it seem like "menu exit" and then they changed it to the "power" symbol, and then they re-added the text. Apparently Mozilla doesn't realize that simply stating *what* is being exited would completely solve the problem: "Exit Firefox" is as obvious as it is simple. But the real problem is that this is essentially a totally new UI paradigm that no-one has ever encountered before. It is a menu, but it doesn't look like a menu and doesn't always act like a menu... and I'm not entirely sure the folks working on it ever considered that a totally new kind of UI element would be confusing to users.

smsmith wrote:Well, my search-fu sucks so I can't find anything. I'm sure they didn't give any sort of reasoning behind it, just a mockup with some lame "this is what we decided to do in a UX meeting that no one else is invited to" sort of a thing.

(At this point, if I was a member of the UX moz team I would find ashamed of such a fail, seeing alone that specific issue)