Moderator: If this is inappropriate for this forum, please delete.

I assume Palemoon will run on most distros, but more interested in Palemoon community recommendations for an XFCE-friendly, Linux distro alternative to Xubuntu. Must be "systemd/snapd free". Thanks for any suggestions.
Top

Salix is a user-friendly Slackware-based Linux. Disadvantages can come sometimes with the package management. Also, you don't get the current software as quickly, as it has to be tested first. Four years ago, I went properly online with a Pentium 3 thanks to Salix 14.1, now Salix 14.2 makes my 10 year old netbook perform very well. 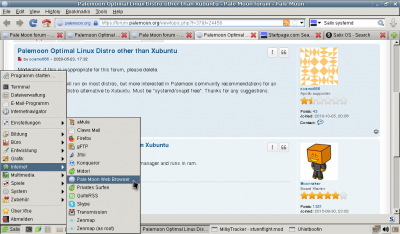 I use Devuan (not with Xfce, but Mate) and Pale Moon runs great on it. I would use Xfce (or at least consider it) if there was a way to have each individual folder use whatever view I want, instead of one global setting for all folders.
Top

Pale Moon's generic binaries should run equally well on all standard Linux distros. You don't need a special distro for it. Just pick one you like best.
"There will be times when the position you advocate, no matter how well framed and supported, will not be accepted by the public simply because you are who you are." -- Merrill Rose

antiX is entirely systemd free, and it's easy to install XFCE on it, while MX Linux comes with a nice customized XFCE by default, plus boots without systemd by default but allows for a systemd boot if necessary.

Restricting yourself to distros without systemd means you won't be getting an optimal Linux experience, either for Pale Moon or for XFCE. The best compromise given that you want a distro without systemd that works well with XFCE out of the box might be Void Linux.

The optimal distro for XFCE would probably be Manjaro, but... well, that uses systemd.

However, the optimal XFCE distro and the optimal distro for Pale Moon aren't even one and the same.

I'd say the optimal Linux distro for Pale Moon itself would probably be CentOS, since that's the main version of Linux they compile and test Pale Moon with. Red Hat Enterprise Linux, Oracle Linux, and Fedora would be good choices as well, since all of those are based on RHEL to varying degrees. Actually, Red Hat Enterprise Linux is something of a "standard" for Linux, so something based on it would be an optimal Linux distro for a lot of purposes, not just Pale Moon. That is likely part of why they build and test on CentOS... it's basically the open-source portion of RHEL for free, but without the instability and involuntary beta testing that often comes with using Fedora.

It's worth noting that we have a Debian maintainer who ensures that the browser works well on Debian, and that means you're pretty well covered on popular distributions like Mint and Ubuntu as well. So it works well with almost all the popular Linux distributions. The only ones I could imagine you having a problem with would be something less mainstream like maybe Gentoo since that isn't as standardized and we don't have as many people who use it.

Putting aside RHEL being the elephant in the room when it comes to Linux and gold standards for a moment. My recommendation for Linux would probably be Oracle Linux if you're using it for a server (it's available to deploy free of charge like CentOS, you can buy support from Oracle if you need it, and they have enterprise/government-grade cryptographic certifications like RHEL), Linux Mint if you're using it for a general desktop and you're new (it's very beginner-friendly), and Manjaro if you're using it for gaming (it has Steam preinstalled). Then again, I would probably recommend the same things whether it was for Pale Moon or not.

Off-topic:
I should probably mention that I myself usually run none of these anymore because I prefer Oracle Solaris and OpenIndiana these days.
Top

A good contender no one mentioned - Devuan. I don't use it myself but it may be my next choice when the current setup gives up.


athenian200 wrote: ↑
2020-05-25, 18:21
Restricting yourself to distros without systemd means you won't be getting an optimal Linux experience, either for Pale Moon or for XFCE.

Off-topic:
I don't agree with that statement, although I use Arch Linux which is systemd based and has no other option. I think what you mean is having easier life and getting more support. You can choose not to reply if we're on the same page. I prefer less noise in the world!
Top

athenian200 wrote:
Restricting yourself to distros without systemd means you won't be getting an optimal Linux experience, either for Pale Moon or for XFCE.