How to make full FossaMail backup?

How to make full FossaMail backup?

I've been using FossaMail for a while and now want to update to the latest version and add a couple of new accounts. But first, I want to back up everything I have ... the account definitions and a couple of years of emails that reside in a named cache location.

Previously, I've just copied the entire cache directory, trusting that I would at least have my content. But, now, I'd like to have a full backup, suitable for restoring everything in the event of a drive failure.

I made my first attempt at this using the Backup Tool and it failed. I quickly realized that I don't have much of an idea of how FossaMail is integrated with Pale Moon ... and, therefore, what an effective backup strategy should be.

What would make a "complete" backup? And what would a complete restore operation look like? (i.e., the steps to bring a full email history into a brand new copy of FossaMail) 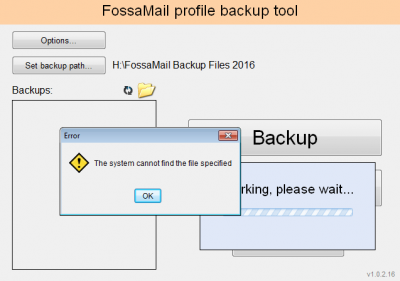 Essentially, you copy your profile to somewhere else, then copy that to the new location after you've done the install.

On Windows 10 my profile is located in C:\Users\****\AppData\Roaming\FossaMail\ (where **** is my user name). It contains everything you need to restore all your settings to Fossamail.

The easy way to do the backup/restore (without using specific software tools) is as follows:
That should be you done.
Top

About restoring, you don't need to run FossaMail and delete that newly created folder. Just put your backed up folder in place before/without running FM for the first time, and everything will start properly as if it were the old installation.
Safe Mode / clean profile info: Help/Restart in Safe Mode
Information to include when asking for support - How to apply user agent overrides
How to download videos

Thanks for both responses.

I've located my profile and everything seems in order except for one thing. I have a Drafts file that, to me, seems huge. I'm fairly sure I don't have anything in it worth keeping.

Is it safe to delete? Will a new one be created? Or should I attempt to move a default version from the newly-installed FossaMail?

Best solution is to empty the Drafts folder from within FM (or directly from your webmail page, if it applies). If not possible, yes you can try deleting it directly and/or replacing it with the default (from the same mail account obviously) but back that file up first and test everything thoroughly before trashing it for good.
Safe Mode / clean profile info: Help/Restart in Safe Mode
Information to include when asking for support - How to apply user agent overrides
How to download videos