About this bulletin board and the Pale Moon website 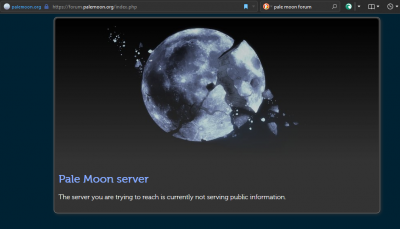 Note: all other forum URL's i.e. https://forum.palemoon.org/ all work. It's only this URL that has the problem: index.php (with the index.php parameter)

Addendum: Upon further testing the issue is resolved using a clean profile of which I'm using now (so probably cannot be duplicated by others).

Any ideas why and/or suggestions (other than to start over with a new profile)?
Last edited by Pallid Planetoid on 2020-01-03, 19:07, edited 1 time in total.
Current Pale Moon(x86) Release | WIN10 | I5 CPU, 1.7 GHz, 6GB RAM, 500GB HD[20GB SSD]
Formerly user Pale Moon Rising - to provide context involving embedded reply threads.
Good judgment comes from experience and a lot of that comes from bad judgment. - Will Rogers
Knowing Pale Moon is indisputably #1 is defined by knowing the totality of browsers. - Pale Moon Rising
Top

I had the same illustration you saw sometime during this past weekend. I thought it was a glitch and it would clear once someone in charge of the server fixed the glitch. And then the Forum Index site was back online.

I've noticed as of recently (past month or so) that when I attempt to clear cache using the preferences/advance/network interface I cannot get below 51KB (in the past I could get to "0" if I recall correctly. Also what's interesting is even if I have less than 51KB in cache the cache will end up 51KB when attempting to clear. 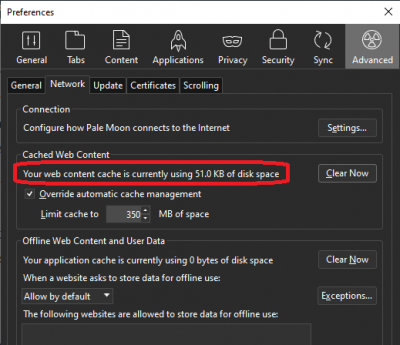 Cleared the following in "Clear All History" (wanted to retain cookies): 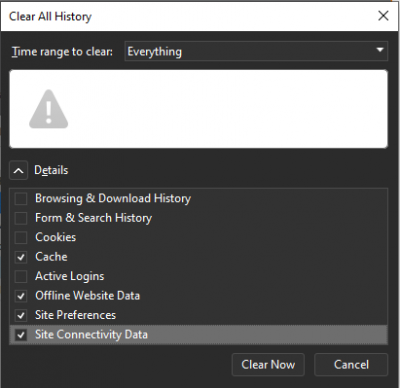 Many thanks satrow --- for pointing me in the right direction!

(... should have remembered to try myself

Night Wing wrote: ↑
2020-01-03, 19:09
I had the same illustration you saw sometime during this past weekend. I thought it was a glitch and it would clear once someone in charge of the server fixed the glitch. And then the Forum Index site was back online.

I never created a new clean profile either. Just the one I've been using since a week before Christmas when linux Mint 19.3 (Tricia) was publicly released.

(something to think about as to why that might be happening

Pallid Planetoid wrote: ↑
2020-01-03, 19:15
when I attempt to clear cache using the preferences/advance/network interface I cannot get below 51KB

Cache is cleared asynchronously (so you can continue browsing while the data is cleaned up in the background) and as such the number you see displayed is not "real-time" or accurate when this process is running. Also, the moment the cache is cleared it will start filling up with new data again, so you may never see a "0" there.
"There will be times when the position you advocate, no matter how well framed and supported, will not be accepted by the public simply because you are who you are." -- Merrill Rose

^ Thanks very much for the reply

-- I hope I am not causing any disapproval for following up on this (perhaps I've done a poor job at explaining here... which it appears I'm perhaps guilty of too much of the time on this board that can unfortunately lead to my comments being misconstrued at times...

To clarify; I'm talking about when I click on the "Clear Now" button multiple times, in the Preferences/Advanced/Network interface, which has in the past consistently caused the "Web Content Cache of Disk Space used" value to continue to reduce until the value of "0" is reached given enough clicks on the "Clear Now" button. I have no idea why for the past few weeks the value would, no matter how many "Clear Now" clicks were performed, continue to reduce but in each case stop at 51KB every time even if the value was below 51KB at which the time surprisingly in these cases (below 51KB) the value would actually increase -- that is jump up to 51KB in one "Clear Now" click and remain there regardless of any additional "Clear Now" clicks that are done. The only reason I had noticed this recent odd behavior was during my testing of the Citibank website over the past couple of weeks or so when I would repeatedly get this result as described (including earlier today when addressing this current issue as well)... (I only bring up this last point to explain why it is that I would have noticed this recent cache behavior that doesn't correspond with what I've consistently experienced in the past and as such in not intended to reflect negatively toward the Pale Moon browser that I'm so very fond of.).

That said, to my total surprise, I now have to add that for whatever reason just checking this out again the past few minutes what I used to get (that is the cache value reaching "0") after a number of "Clear Now" clicks I am once again getting (after repeated testing of this I might add). So it appears the clearing of cache is back to what I'm used to getting again.

My example below took 4 "Clear Now" clicks to reach the "0" Bytes value (the number of clicks necessary have always varied depending upon where the cache starts): 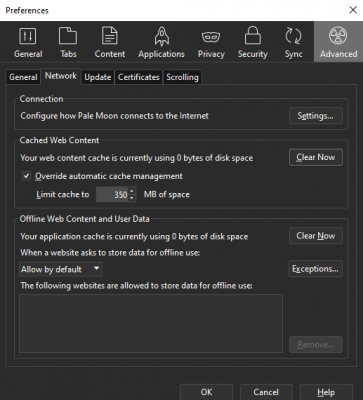 I bring this up to make sure that the result I usually get (that I've generally always gotten in the past and now am getting again) is to be expected (I welcome anyone who wants to check it out specific to them to confirm). I'm assuming this to be the case for everyone (with that perhaps I'm discussing a different method of clearing cache than referenced above that is causing some misunderstanding).... And I hope I've conveyed my point in a way where there can be no misunderstanding.

(I was reluctant to bring this up -- but I'm hopeful that an open and fair minded discussion can always be the expectation for all of us in this forum which in most cases most assuredly helps thankfully serve the Pale Moon community so extremely well.

There really is nothing to discuss.
It's an asynchronous process. The command to clear entries is given and the cache is cleared in the background. The fact that the counter updates when you click the button does not have anything to do with the background process, and as I said you may never see a 0 there as a result (but if you repeat it often enough you may get "lucky" and have a measurement take place when it is actually just finished clearing) What is unclear about that?
"There will be times when the position you advocate, no matter how well framed and supported, will not be accepted by the public simply because you are who you are." -- Merrill Rose

^ Many thanks for your feedback... My point is that based on my experience it hasn't been a matter of getting "lucky" in that a "0" is a rare occurance -- I have numerous times observed a "0" result at some point after multiple "Clear" clicks. I did it once again just now and observed a "0" (based on what I've typically observed -- I'm of the opinion I can do this consistently).... but then maybe I'm wrong -- I can only go on what I've observed....

That said, I defer to your expertise (as I have personally near zero relative expertise myself on most technical issues

) on the technical aspects of the process you have reference and as such the "0" value may very well be totally irrelevant. And I also defer to your opinion that there may really be nothing more to discuss and with that do very much appreciate your time given on the topic.

I only brought this all up because of the unexpected consistent 51KB result I was getting over a period of time of which I would expect this value to not consistently be that same exact number over the weeks that this occurred as well (which I'm assuming you would agree) as this behavior was in contrast to the "0" result I had consistently experienced in the past and am currently experiencing now. I would lastly say that based on your expectation of in general not ultimately reaching a "0" value as a result of multiple "Clear" clicks is therefore an aberration hence in that case does suggest that what I get is relatively unique to me perhaps (a peculiarity that I find interesting in-and-of-itself FWIW).

Thanks again for your time.

Oh, btw -- as to "what is unclear... ". I have not at all intended to say that you've been unclear (frankly, I'm at a loss as to why you'd think this). You've been abundantly clear as always

-- what I have said rather is that I've likely been unclear (sorry for any confusion on this point).
Current Pale Moon(x86) Release | WIN10 | I5 CPU, 1.7 GHz, 6GB RAM, 500GB HD[20GB SSD]
Formerly user Pale Moon Rising - to provide context involving embedded reply threads.
Good judgment comes from experience and a lot of that comes from bad judgment. - Will Rogers
Knowing Pale Moon is indisputably #1 is defined by knowing the totality of browsers. - Pale Moon Rising
Top
Post Reply
10 posts • Page 1 of 1